Amaze aims at using technology to solve a major psychological problem faced by large number of students. The solution is intended to be two-fold: a) A wearable device (band) which tracks a user’s heart rate over a period of time. This data is collected through an app and based on an analysis and identified patterns, minor pulses or vibrations are triggered through the wearable device to stimulate relaxation signals during anxiety attacks. These triggers act as warning signals to user that will help him identify overwhelming-anxiety. b) Design an app interface that will suggest user with personalized mindfulness techniques based on the data patterns gathered.

The goal is to help user develop a habit of mindfulness practice, help him become more self aware of situations at the time of his attacks and help him to learn how to alleviate his symptoms through self-management. Eventually user will develop a mindfulness habit and become more self-aware. The goal is to alleviate user’s stress levels through self-management.

Based on the root concept and intended users (target audience), the interview process planned was two-fold i.e traditional interviews and contextual inquiries. Traditional interviews were used to gather basic demographic information of the participants. Contextual inquiries were conducted to gather activity information in the context of the defined problem. All the answers and data gathered by each of the team members were collated to identify obstacles, patterns and age-based activity preferences of the users.

Through contextual interviews among various age groups and origins, we created three different personas and activity concepts linked to them. In order to understand the user behavior, we focused on learning how anxiety and stress affected them on a daily basis. We interviewed and discussed with them the effect of stress and anxiety on their mental and physical health in addition to the effects it has on their academic progress and other aspects of their life.

We identified at least two potential users and categorized them based on age and self-awareness level. (knowing whether they suffer from an anxiety problem or not) Each team member worked on a set of interview questions and context plans. Broadly, the questions were segregated based on user demographics, behavioral, emotional and functional activities.

Findings from the research show that students face stress and anxiety on a daily basis. However, on some occasions, the level of the anxiety reaches a peak especially during the exam period and giving public presentations. We found that these moments can lead to stress and lack of self-confidence which can affect their performance, sleeping cycle, and even their eating habits.

The goal of activity concepts and plan was to identify difficulties in the lives of the users. We looked for key emotional triggers, feedback, and motivations that would help alleviate stress in users. I have summarized a few points that we’re considered.

While our initial root concept was planned with 15-18 year-olds in mind, the findings led us to believe that the defined problem can be actually categorized based on much wider age groups and this report presents activity concepts for students from 12-22 years categorized into 3 age groups of 12-15 year-olds, 15-18 year-olds, and 18-22 year-olds. We concluded that each of the age groups had different activity requirements and key motivations.

Karen is comfortable using a mobile phone. She owns a mobile phone and is fascinated by the capabilities mobile phones have. She is on all social media sites. Provide triggers (haptic feedback) to her anxiety, make her aware of when exactly she gets her panic attacks by showcasing the times in the app and drawing patterns out of it. To make her develop a mindfulness habit over a period of time through the app give her small tasks to perform and provide instant feedback as gratification for completing the tasks. Based on her daily other habits, through gratifications introduce her to hobbies to pick and pursue- ( e.g if reading is a hobby, suggesting a book and alerting her to read before bed every day to relax the mind )

Listing down the requirements

The system is required to track the user’s heart rate and sleeping patterns in order to provide a detailed daily summary. In coordination with the phones calendar and reminder systems, Amaze is able to use vibrations and sound as a notification system to help the user organise their time better to avoid stress or anxiety caused by poor time management. Furthermore when the App records a raise in heart rate, it can guide the user to breathing and relaxation exercises. We can conclude that another requirement that can help in this process is an open mind; someone who is open to use technology and their effective methods to relax their mind and body will find it easier to use Amaze and will better experience its beneficial effects on their mental wellbeing

The design process included basic sketching, individual team members experimenting wireframing using multiple softwares like Axure, Adobe XD and finally putting together the design using a shortlisted software called AXURE. Being aware that the users own mobile phones and are highly dependent on a daily basis, we worked on an interaction design for a mobile phone app. During this phase, every possible view was designed in order to present a complete picture of the design with the team and how it fits into the end user goals.

Interaction design phase started with sketching so that it can be done and redone multiple numbers of times as required. We found it easy to sketch ideas using pen and paper and validate them from test users before jumping into prototypes.

We created wireframes in order to illustrate high-level concepts, approximate visual layout, behavior, and even look and feel for an interaction design. 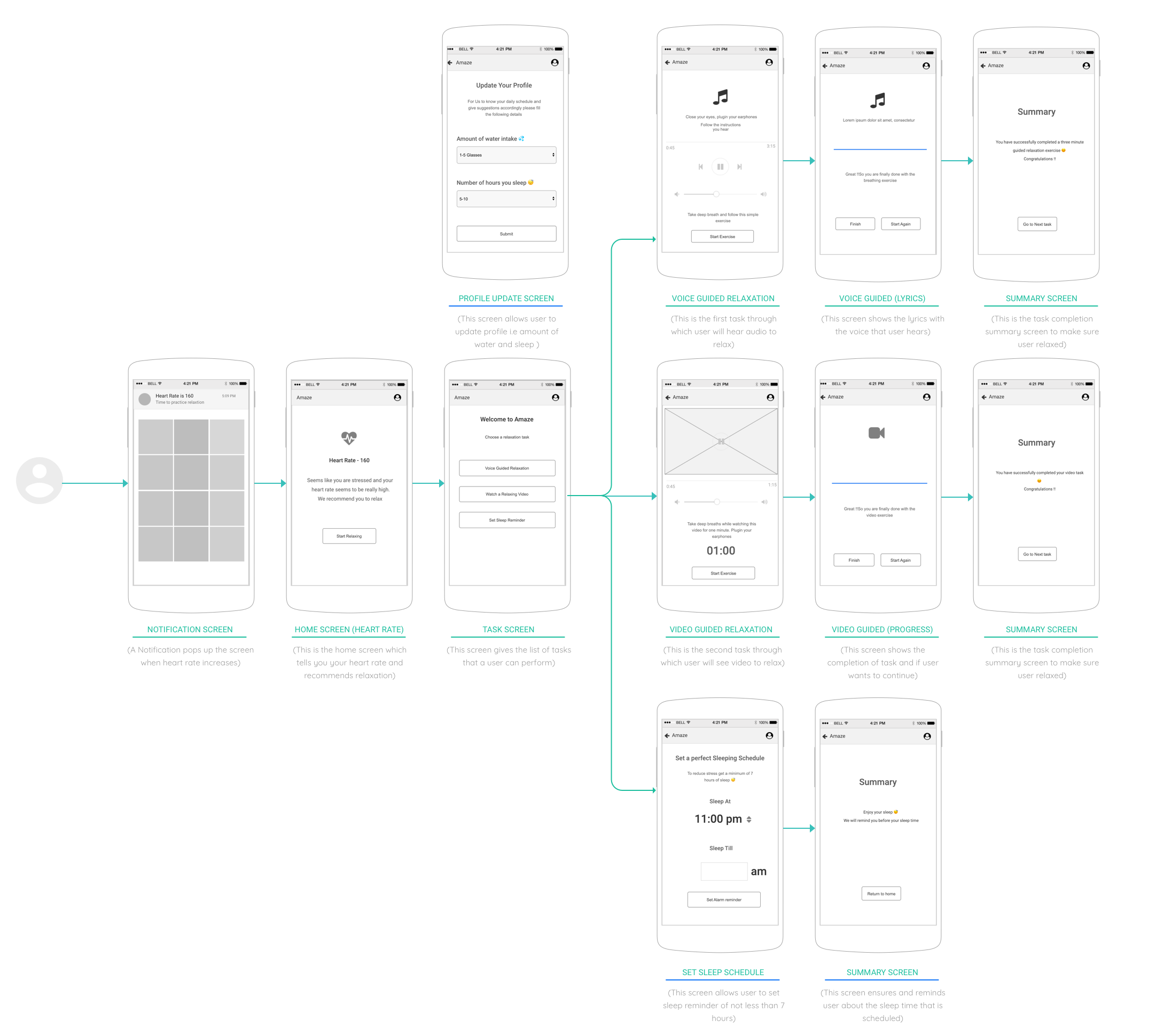 Jumping directly from paper prototypes to high-fi interactive prototypes could have been tricky at times so we made an intermediate stage of prototype as mid-fi prototype. In this stage of prototyping we showed interactions and breath of user interface objects. This was done in order to do formative evaluation before jumping into high fidelity prototype. 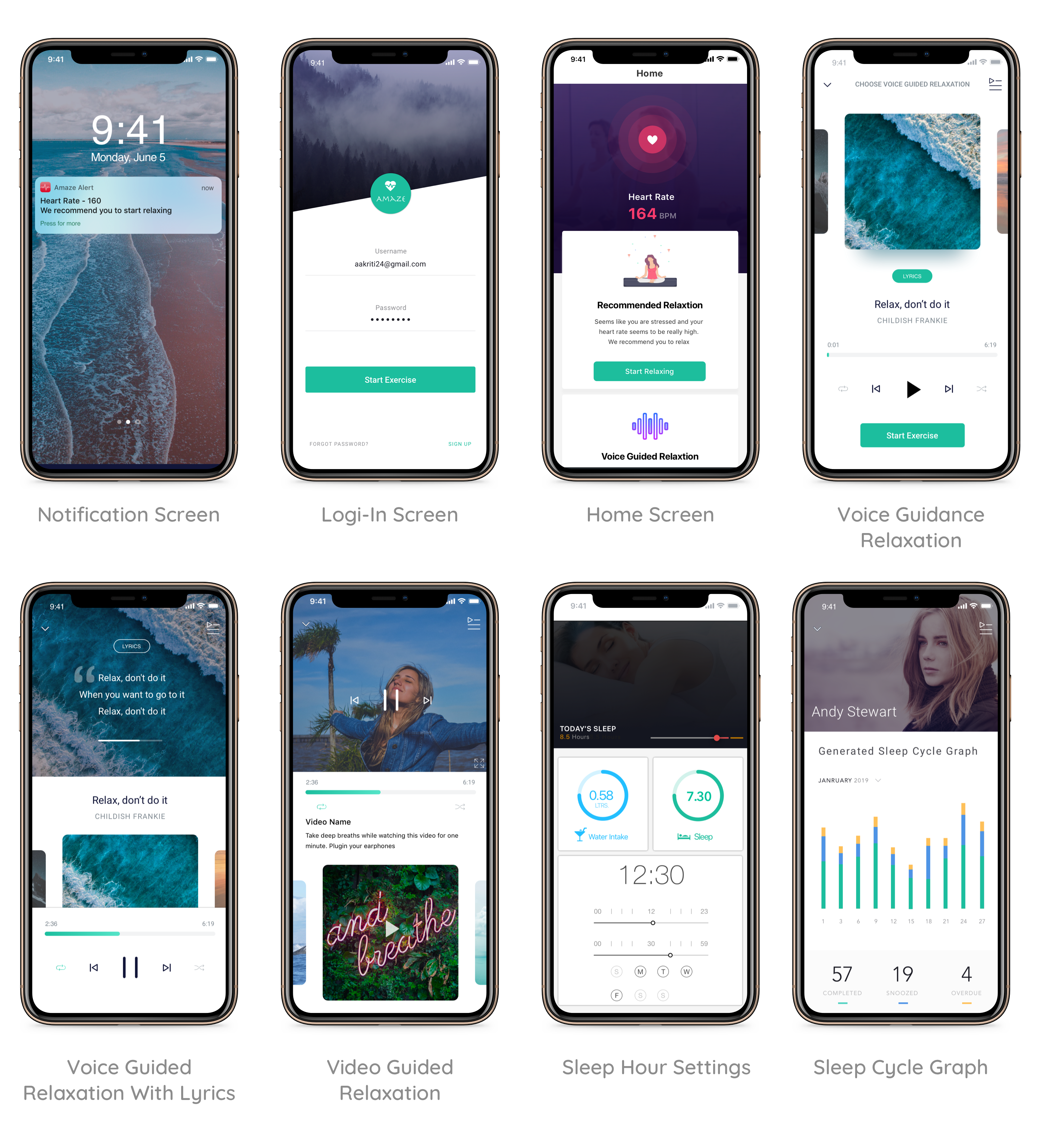 We used a predetermined script for the testing process and upon obtaining formal consent form from test users, we achieved test results for the 3 tasks: relaxation through breathing and voice guided activity, relaxation by using a relaxation video in a combination with breathing and a visual timer to improve focus and lastly, relaxation by setting a 7 hour sleep cycle reminder.

Because the wireframe doesn't actually have a voice guided relaxation or the audio-video based relaxation video, test users were assisted by one of our team members, who played the role of a computer. Preloaded 3 min relaxation task and a 1 minute video were played for them at appropriate times during their task journeys. User’s heart rates were noted before and after the tasks.

The idea for this usability test was to figure out if the participants were able to finish 3 different tasks based on the defined scenarios by using our prototype. The first scenario was to complete a guided breathing task, where the user is guided by a voice to perform a 3 minute breathing and meditation technique. The second task was to complete a video-based relaxing activity, where the user can choose to watch a video with relaxing background sounds that alleviates stress and promotes relaxation. The third task was to complete a sleep reminder activity, where the user can set timers and reminders basically to achieve a habit over time of 7 hour sleep cycles.

This was the first team project assigned to us, I was not only responsible for UX design but also the project management, strategy and team leadership. I realized that every problem initially looks difficult, but with right approach and design mindset we can solve any issues and achieve good results. This project incorporated the entire design process from brainstorming to sketching ideas and making prototype to finally taking those prototypes to actual users and testing them.

Outfit Of the Day